Find out who we are and why we do this: About us 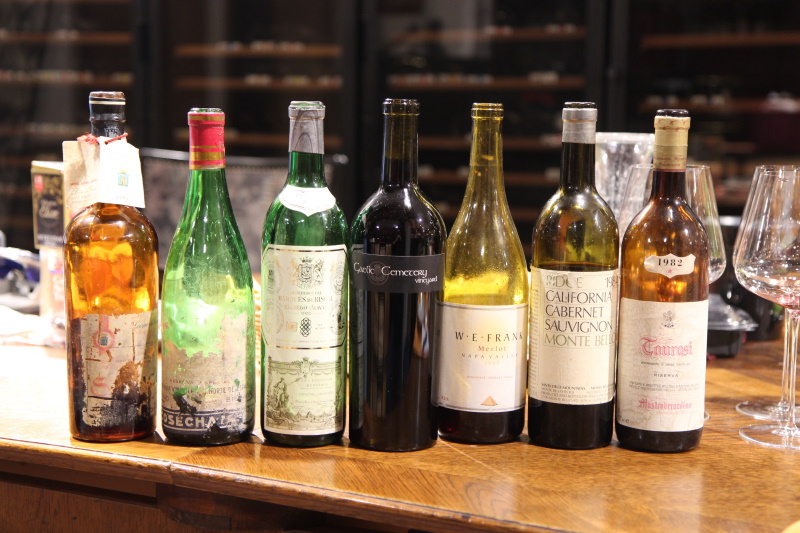 We tasted some older bottles from Italy (Puglia and Campania), Rioja, Australia and California. Some were over, only one was great.

The Mastroberardino 1982 Taurasi Riserva from Campania had acetone and potato sack. The Leone de Castris 1959 Salice Salentino Stravecchio had potato sack. Perhaps both wine were also tainted by cork.

The CVNE 1959 Reserva Especial had extremely dense potato sack. The Marques de Riscal 1955 Reserva was a bad bottle and most probably not representative although it ullage was VTS: with brown colour and caramel and mushrooms, it is nearly broken and a bit sweet. 15/20 points.

Also a bad bottle was the ADW 2006 Shiraz Gaelic Cemetery from Clare Valley in Australia. Or is it really broken? When we tasted this wine in 2009, it was a great Shiraz with opaque purple colour, eucalyptus, blueberry, blackberry and the typical Shiraz sweetness, structure and density (18.8/20 points). Now the wine is a bit simple and dull. 16.5/20 points.

So we switched to California: The W.E. Frank 1997 Merlot (with 8% Cabernet Sauvignon) was made from overripe Merlot, originally intended for Opus One. Young it was a great wine, but overripe wines do not age well.With plaka and cassis, it is full-bodied, relatively balanced with a bit too much acidity and very ripe. 16/20 points.

The Ridge 1984 Monte Bello started with green notes. But with more air it switched to red pepper and cassis. It is full-bodied and still has a lot of tannin with a good structure. It seems to be a young wine and shows that Monte Bello needs time and can be cellared for decades. 18/20 points.